One day in 14th century Italy, two friars entered the castle of Sir John Hawkwood, the storied English mercenary captain, to petition him regarding some minor business. “May God give you peace, my lord,” they began. “May God take away your alms,” Sir John responded venomously. “Do you not know that I live by war and that peace would be my undoing?”

Fortunately for Sir John, peace in 14th century Europe was infrequent, short-lived and never an obstacle for men of the sword in gaining glory and wealth. Hawkwood lived in a time of perpetual war. He was truly a man of his era. Hawkwood earned his chops in France in the expeditions of English king Edward III. It was the first phase of the Hundred Years War, the horrific, long-running series of dynastic contests between England and France that endured from 1337 to 1453. The Treaty of Brétigny in 1360, which ended this opening phase of the conflict, seemed decisive. But it would not be the “undoing” of the great captain and his ilk who formed the infamous “free companies,” private mercenary armies that would, in time, prove indispensable to continental warfare in the coming centuries.

Hawkwood’s war in France outlived him and many others. In England and France alike, war became the reigning paradigm, peace an aberration. Even more, it fostered a perverse system of dependency. Tax schemes were constructed around supporting the war effort, businesses survived on its needs and political (and material) fortunes were made or lost not at court but on the battlefield. If this sounds familiar, we should be more than a little worried.

Like the Hundred Years War, the long wars of today are complex and ill-defined making them paradoxically harder to successfully wage and harder to stop waging. The United States has been in an unceasing state of war since it invaded Afghanistan in October 2001, though the American war state arguably stretches back long before that. Beyond the rising costs and changing strategies that result from long wars, one phenomenon that deserves increased attention is their deleterious effects on civil-political and warfighting norms. Just as in Edward III’s England, as America’s wars become longer and more intractable, they gradually start to erode the accepted norms that once functioned as indelibly important aspects of a system in which war was finite. As usual, the best way to inform our present conflagrations is to look to past ones.

Chivalry was at its height in Sir John Hawkwood’s Europe. A code of honorable battlefield conduct by which any knight of worth was expected to abide, the chivalric ethic itself was among the many numberless casualties of the gruesome Hundred Years War. When Edward III finally pressed his regnal claim for France through force of arms in 1337, he led a feeble, impoverished and isolated princedom into conflict with the most powerful army on the Continent. France was already steeped in the chivalric tradition and her knights were renowned for their bravery and skill. Yet the mismatched conflict wore on for decades. How?

Edward III’s England boasted an impressive retinue of mostly peasant longbowmen. Indeed, all physically able young men in the realm were expected to train weekly within their shires at mastering this difficult weapon. In the longbow lay England’s only hope of defeating the French war machine. To do this, chivalry had to die and so it did on a multitude of famous battlefields. At Crécy in 1346. At Poitiers in 1356. At Agincourt in 1415. France’s men of chivalry, her plate-clad valorous knights could seldom come close enough to the English lines to meet their foe man to man as the military ethic of the day dictated. Felled by showers of missiles, the “Flower of French chivalry” lay bleeding on French fields.

By the later stages of the war, France had learned its lesson. Men at arms recruited mostly from the peasantry, as well as mercenaries, gradually reduced the value of the knightly class of combatants. French exploitation of gunpowder cannonry turned the tide of the war and ultimately ejected the English from nearly all of their Continental possessions. As the war became more pitiless, the imperative to preserve chivalric conduct had waned. By war’s end, chivalry lay buried in the fields of France alongside scores of its adherents.

Today we view such interminable bloodletting as a curious idiosyncrasy of such barbaric times. The 27 years of the Peloponnesian War and the 118 years of the Punic Wars both saw an amplification of savagery and a deterioration of their own standards of warfighting. The Greek belligerents of Thucydides’ epic struggle abandoned the time-honored hoplite ethic to butcher each other on an unprecedented scale while Athens gave way to tyranny. Rome and Carthage killed each other’s people in scores unmatched until the modern era. But how hubristic of us to think these episodes mere products of their eras. America’s 18 years at war have dulled our consciousness of the norms we’ve lost on foreign battlefields alongside our honored dead. What do nearly two decades of war do to a people?

This past week, the Pentagon confirmed the deaths of two U.S. Army soldiers killed in action in Afghanistan. Master Sgt. Micheal B. Riley, 32, and Sgt. James G. Johnston, 24, lost their lives in a war that began when they were children. The country for which they died barely batted an eyelash. America’s “forever war” has had a severely reductive impact on the most communal experience warfighting fosters within a nation, that of mourning. To mourn the fallen is to bombard social media with “RIP” commentary and then move on. To honor their memory is to slap a “support our troops” bumper sticker on the back of your vehicle. To normalize the pointless savagery of their wars is a virtue.

On Friday, the defense rested in the trial of Special Operations Chief Edward Gallagher, a Navy SEAL accused of the murder of unarmed Iraqis, including the stabbing death of an enemy prisoner of war. Gallagher has drawn the attention of President Trump who has entertained the possibility of a pardon. Though the President seems to have stepped back from the possibility of a pardon for now, Trump’s sentiment embodies a broader public apathy about not only jus ad bellum but jus in bello. The treatment of this Navy SEAL, this warrior seasoned by multiple combat deployments, by the JAG was “unfair.” We ought instead to defer to our warfighters when critiquing their conduct in a war most Americans no longer understand or even pay attention to.

Our own “chivalric ethic” is undermined when we allow ourselves to be worn down by the breathtaking longevity a faraway conflict that has no aim, no meaning and no end in sight. It is the foreign policy manifestation of nihilism, a most disturbing trend. We should not question why we fight, we are told, and we should certainly not question those who fight. Even blatantly unpardonable conduct is arguably pardonable when contextualized in the boundless universe of battle.

Our plight is familiar to the likes of a medieval condottiero like Sir John Hawkwood who would find a home in our world of far-reaching, endless warfare that daily becomes less self-aware and more profitable (for some). Thucydides, Scipio Africanus and all others who stoked their fame, fortunes and reputations in the fires of long wars provide us with tales of battlefield glory and tactical brilliance. However, their experiences also speak of a deeply, profoundly human cost, almost spiritual in its gravity and meaning. It is to this latter message we should intently listen. 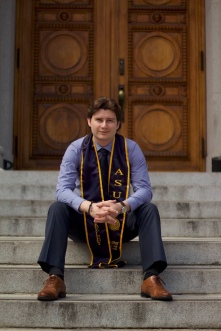 Scott serves as Realist Review‘s Editor-in-Chief. A graduate of the University of California, Berkeley, he received his BA in Political Science in 2018. He was the founder of the first ever Berkeley chapter of the John Quincy Adams Society and received highest departmental honors for his thesis Tehran’s Pragmatism: Iranian Strategic Culture After the Nuclear Deal. He is interested in national security policy, arms control, early modern foreign policy and the archaeology of the classical world.