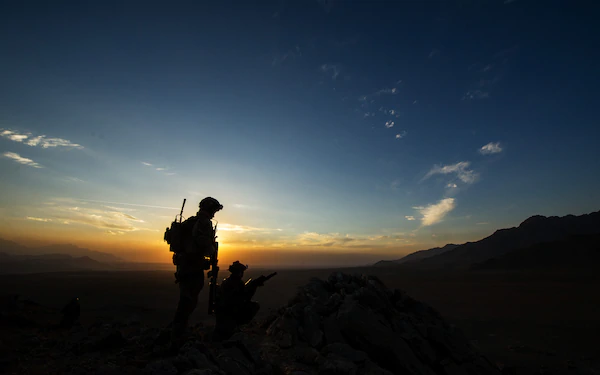 It’s increasingly popular and bipartisan to call for an end to “forever wars” like Afghanistan.

President Biden seems to have recognized this reality, writing on the campaign trail that “staying entrenched in unwinnable conflicts drains our capacity to lead on other issues that require our attention, and it prevents us from rebuilding the other instruments of American power.”

Luckily, the opportunity for this strategic recalibration has presented itself. A deal forged by President Trump with the Taliban set a goal for withdrawal of the remaining 2,500 American service members this year.

However, as that May 1st deadline approaches, the debate over whether the US (and by extension, NATO) should honor it has intensified.

A Congressional study group recently listed a trio of interests as justification for their recommended delay in withdrawal:

Each of these three objections are easily dispatched, leaving full withdrawal of regular American and NATO forces the best option.

The primary and most legitimate concern over withdrawal is the argument that Afghanistan would once again become a haven for terrorists to plan and carry out attacks on Western nations.

It is true that the Taliban has not entirely ended its relationship with Al-Qaeda, but two decades of the War on Terror have changed much since 2001.

The American intelligence community has vastly expanded powers and honed its counterterrorism tools. These operations have taken place in at least 85 countries in the past three years alone.

In 2016, the United States conducted 1,071 drone strikes in Afghanistan. American and allied strikes have killed scores of Al-Qaeda leadership in Afghanistan and throughout the region, a tactic which could continue without boots on the ground.

Two decades of war have also proven to the Taliban the willingness of the West to punish hosts of terrorism, a strong deterrence to allowing Al-Qaeda to prepare attacks from Afghan soil.

Indeed, the Taliban committed in the 2020 Doha Agreement to “prevent any group or individual in Afghanistan from threatening the security of the United States and its allies, and will prevent them from recruiting, training, and fundraising and will not host them.” A breach of this promise would clearly allow the United States and allies to respond with overwhelming force as needed.

“The ‘safe haven’ argument [for remaining in Afghanistan] is weak, as there are already lots of places in the world where one can disappear and plot,” explained Eugene Gholz, Associate Professor of Political Science at the University of Notre Dame.  “You don’t need Afghanistan for that, you could use rural Idaho.” (Or Hamburg, Germany, or Venice, Florida…).

NATO Secretary General Jens Stoltenberg still publicly worried that “ISIS could rebuild in Afghanistan the terror caliphate it lost in Syria and Iraq.”

This fear overlooks the reality on the ground, where the United States has tacitly recognized the Taliban as a partner in beating back ISIS elements.

“At some times in the past, when the Taliban was conducting operations in eastern Afghanistan against ISIS, [when] we had the opportunity to take a strike against ISIS formations, we would take that strike,” Marine Gen. Kenneth McKenzie Jr. stated.

“The Taliban and ISIS, as you know, have a theological dispute: They are intractable enemies,” McKenzie added. “Whatever the Taliban does or doesn’t do with Al Qaeda, they will actually pressure ISIS, and we have seen evidence of that going forward.”

With continued intelligence assets and pragmatic dealings (and perhaps a few of the current legion of contractors), the United States and NATO will be able to ensure the true threats are eliminated without a large armed forces footprint.

Thank goodness there are multiple anti-extremist, well-funded and well-armed nations in the neighborhood that the United States can collaborate with on future counterterrorism missions.

The second and related objection to withdrawal is the general “stability” of Afghanistan.

Without Western intervention, the Taliban appears to be the most likely force to emerge from a local fight for control. Local farmers complain to reporters that “the government has failed.”

The government’s military also inspires little confidence, despite years of investment. The most recent Special Inspector General for Afghanistan Reconstruction (SIGAR) report indicated the Afghan army abandoned nearly 200 checkpoints in Kandahar province–just in the month of December. Afghan government sources also acknowledged to the Congressional study group a persistent problem of “ghost soldiers” (military personnel who are falsely listed on the rolls and for whom a fraudulent salary is paid).

Does a Taliban-controlled Afghanistan, even one that does not interfere with American counterterrorism actions, pose a threat to other American interests?

“The Taliban has predominantly local and regional concerns,” answered Professor Gholz. “A top priority of a Tablian-dominated Afghanistan is not to pick a fight with the US, it is figuring out a way to govern a country that is very difficult to govern.”

Even without a military presence in Afghanistan, the United States retains bases and thousands of troops throughout the region. The ability to react timely to any foolhardy move by a Taliban-controlled Afghanistan would remain, although the ability of such a poor nation to cause serious trouble is highly doubtful.

The most effective means for shaping the foreign policy of Afghanistan will always be to pressure neighbors like Pakistan that exert much greater influence over the Taliban and Afghan internal affairs.

Most importantly, however, is to have a realistic conception of “stability.” Does American national security require Afghanistan to be as stable as Ohio?

No. Stability simply means a nation that neither foments terrorism nor attacks America and her allies. Both can be prevented without occupation.

Otherwise, every service member that remains is a liability, as even one casualty caused by internal Afghan fighting risks sparking a new decade of American military investment in a quagmire. The troops are exposed targets, and not just for the local factions–they are a great way for bigger adversaries to take potshots at the US!

A final, and perhaps the most curious, objection to withdrawal of military forces from Afghanistan is an argument about “lost progress.”

NATO Secretary General Stoltenberg recently made a telling remark, worrying that  “if we leave…we also risk losing all the gains that were made in human rights, especially for women, over the years.”

To be clear, the advancement of human rights and especially women is a laudable goal that the United States should support.

But was the purpose of this intervention two decades ago to teach a backwards country how to better treat citizens by force?

By that logic, one that ignores any mention of this nation-building goal in the 2001 Authorized Use of Military Force or the NATO Article 5 invocation, the United States has much bigger fish to fry.

For those who believe the American military should be used to advance human rights, where are the calls to invade and halt a State Department recognized genocide?

Cultural matters, such as the Taliban’s reprehensible treatment of women, are best handled by sticks and carrots from diplomatic agencies like USAID, the World Bank and the UN.

However, imposing global human rights has never been the strategic organizing principle nor the expertise of either the United States military or NATO.

Why does it matter so much to finally and completely withdraw?

The Watson Institute at Brown University estimates that total American costs in Afghanistan since 2001 are now approximately two trillion dollars (that wasn’t a typo–it’s trillions with a “t”).

The cost of the war is increasingly felt at home in other ways. Americans in the Pacific Northwest found themselves shorthanded fighting fires because of deployments to Afghanistan.

Since this article will undoubtedly land on the Resolute Desk, a pragmatic politician should take note that ending Middle East interventions is domestically popular–close to 70% of veterans and military families agree that a complete withdrawal is the best move for the United States.

The United States and NATO now find themselves at a crossroads. Having completed the original objectives of their mission, it is time to celebrate a realistic conception of victory. Bypassing this clear May 1st exit ramp commits America and NATO to the uncertain future of a conflict where years quickly turn into decades.

A withdrawal from Afghanistan is a crucial test of the West’s ability to move beyond this costly era of interventions and into a wiser stance of realism and restraint.

Andrew Jarocki is a recent graduate of the University of Notre Dame with a degree in Political Science. He has worked in both Congressional offices and campaigns. He hails from beautiful Duluth, Minnesota. Andrew is passionate about writing on the relationship between domestic and foreign policies.