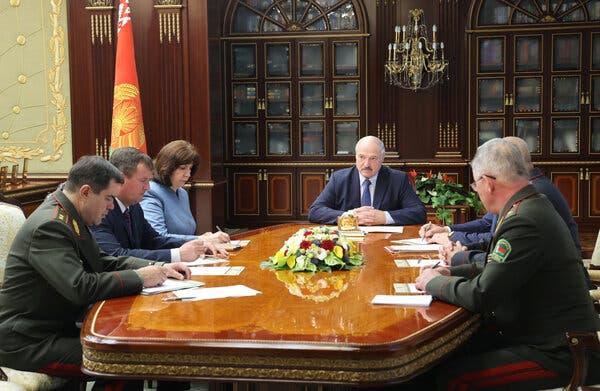 When the Belarus protests were still burgeoning, Minsk officials arrested 33 men for suspected involvement with Russia’s private security group, Wagner. A Minsk-based source reports that the arrested men held alleged connections with two known citizens of Belarus who each face criminal counts of instigation and suspicion of preparations for mass riots, respectively. Under the shadow of his contested election, President Lukashenko immediately spun a narrative of paranoia: he identified the Wagner employees as Russian pawns sent to upend and disrupt the capital city. In an address, he accuses the men of planning both a revolution and a massacre. The men had been “lying in wait” Lukashenko claims, perhaps preparing for another Maidan as seen in Ukraine.

Initially, Russia denied the allegations raised by Lukashenko and maintained that while the men did serve a military group, Belarus was merely a layover en route to another location. The discovery of several items during the arrest, such as Sudanese bank notes, indicate that the fighters could have instead been on their way to East Africa, an area where Russian special  forces continually reoccur.

However, Moscow later changed its stance. Putin claims that the security workers were lured to Minsk, and forcibly dragged across the border with the sole intention to promote unrest. Putin alleges that this seduction was a joint effort between the US and Ukraine.  This recent assertion not only further exacerbates bilateral relations between Minsk and Kyiv (already made tense by the extradition of these men), but also effectively removed any perceived control of the formal Russian government over the Wagner group. They are obviously beyond Russian authority, so the Kremlin is absolved of any further culpability.

Despite the previous accusations from Minsk, Putin has now turned to support Lukashenko, promising military support during a recent revival of protests. Moscow chose to shift the mercenary situation into a means to divide already fractious allies, while also presenting itself as hapless to rein in a suspected private military company. Russia received 32 of the 33 mercenaries after their arrest, on account of their citizenship, but did not face any further subsequent suspicion or rebuke from Belarus.

The incident in Minsk provides a necessary reminder of Russia’s growing reliance on companies such as Wagner, which are not regarded as official arms of the Kremlin’s motives or policy. However, the fact that these unaffiliated Russian actors do provide representation of Putin’s goals deserves deeper recognition. Legitimacy and state transparency have become the central concerns of the ever-baffling role of a private military actor.

However, the inscrutable character of non-state military work is equally matched with the topic’s ability to completely evade easy definition or recognition. Language and terminology consistently interchange, from labels like “mercenary groups” to “semi-state security actors”.  For the purposes of this article, the semantics of distinguishing between these labels will not be discussed (largely because of the inconsistency in both journalism and literature), and the term private military company “PMC” will instead be used as a blanket term.

This recent reemergence of Wagner, no matter how speculated, must refocus the international community on Putin’s recent foreign policy of plausible deniability and unfamiliar forms of international aggression. Though the mechanics of the group is open to much speculation, their disruptive power comes from the sole fact that the Russian government considers them to be illegal.

Wagner fighters are the ghosts of a Russian military, and now have worked over a decade to serve the shadow arm of the Kremlin’s international aspirations. There are several practical roles which an unauthorized security force serves. Apart from aspects like budgeting mechanics, an unofficial and unrecognized force holds the powerful role of undeniability. Following an Iranian clash in 2018, Russia publicly sought better regulation of their private military contractors. In several rulings, Moscow maintained that private military companies were unconstitutional and refused to legalize them. Consequentially, an outlawed group became all the more powerful; by severing nominal relations to Moscow, Wagner now operates as freely as a pure PMC, but with the added benefit of Russia’s unspoken backing. In this way, Wagner takes on the form of a quasi-PMC, sharing attributes with legalized PMCs but also maintaining the critical mystery that defines its success.

By keeping PMCs (Wagner specifically) illegal, Russia exerts the highest possible amount of control over them. The lack of affiliation makes their actions all the more clandestine, and even more difficult to either sanction or rationalize. An illegal force also requires a limited, specialized market, in which only those with the valuable currency of political favor are granted a position within the group. Keeping it illegal keeps the practice highly political. Moscow, then, receives incredible benefit of internal control by keeping the Wagner group unconstitutional.

Using an unrecognized force allows even of threats toward sustained offensive measures in destabilized zones. A similar recent example of Russia’s denial occurred this year. In Libya, US forces noted a growing military presence marked by an arrival of Russian aircraft, utility trucks, and armored vehicles. The sheer volume and quality of the incoming resources, all attributed to the active Wagner group in the region, signal the backing by the Russian Ministry of defense. Russia has been sustaining the ongoing proxy war in Libya, and shows no sign of accepting attribution. All of this activity, of course, is done in blatant disregard of the UN arms embargo imposed on the region. As one official notes, “Russian involvement is evident — which the Kremlin lies about every time they deny it”. This methodology extends to all of Wagner’s operations, from the Central African Republic, to Syria, even to Belarus.

Additional side effects of Wagner’s lack of transparency includes filling the Kremlin’s propaganda machine and sustaining specialized efforts. The private use of contracted soldiers keeps publicly reported military death tolls low, which better enables Russia’s propaganda machine both domestically and internationally. This not only obscures the countless casualties inflicted by Wagner employees, but also the deaths within the company. Independent contractors, often dissatisfied former members of formal military forces, have proved to be a bountiful commodity, not just in the former Soviet Union, but globally. Personnel adapted to unorthodox and specialized operations truly find a niche in PMCs at large, and in Wagner.

A similarly concerning aspect of the Wagner group as an extension of Russia’s foreign policy is Russia’s absence from the 2008 IRC Montreux Accord. By refusing signatory status, Russia is not upheld to international standards for good PMC practices in armed conflict zones specifically. So even groups other than Wagner, which hold the similar role of semi-state or quasi-state security actors, are not answerable to an international code.

On the opposing side, there is also a reason for concern in the actual ability of an unmonitored group, bent on individual profit and personal competition. Though their backing may come from the Kremlin, not all of their actions may be “unofficially” Kremlin sanctioned or approved. This manifests in infighting, and even clashes with officially recognized military forces. The ambiguous form of Wagner allows Moscow to use an “elastic power” globally, which raises several new questions of diplomacy. Like the movement of most PMCs, its movements are much more unpredictable and untraceable, and yet it also evades the typical international conventions surrounding good PMC governance. The lack of recognition from Wagner’s own state denies the global community the opportunity for quality insight into the inner structure and motivation of the group as a whole. The Russian government appears comfortable with the vast ambiguity that the Wagner group provides, yet many dominating theories surrounding PMCs lack the nuance to truly define and understand this semi-state security actor. The 33 men found in Minsk begin to bring some clarity to the vast opacity of the Wagner Group as a whole, and their work to promote Putin’s adventurism.

(Realist Review also has an in-depth examination of the Belarus situation available here.)

Anastasia is a senior at Messiah University pursuing a degree in Peace and Conflict Studies and Politics. Her areas of interest include international peacekeeping and Eastern European politics.