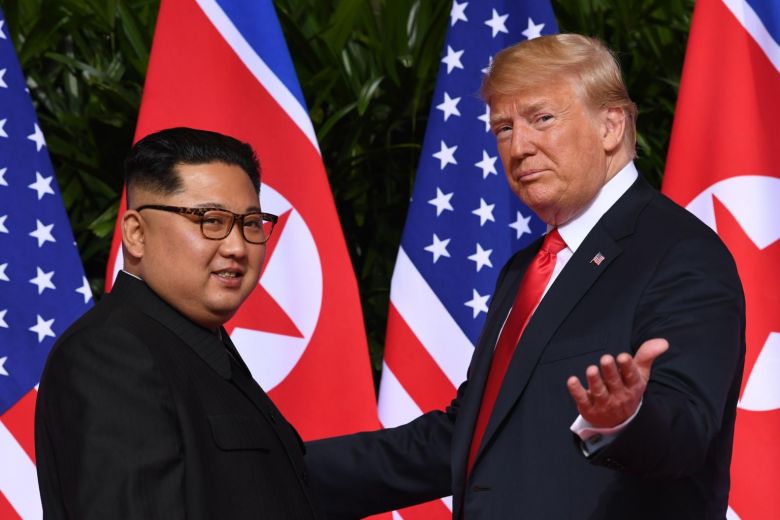 Albert Einstein described insanity as doing the same thing over and over again while expecting different results. Likewise, world leaders have repeatedly put faith in negotiating denuclearization with North Korea — despite their ritualistic handshakes and photo ops always ending in a flurry of missiles.

Since the February summit in Hanoi, Pyongyang has conducted a total of eight missile tests, the latest of which came out of a submarine which experts say could be parked off the West Coast of North America. Despite the provocations, Trump Administration officials showed up in Sweden to talk. They were shamelessly accused by the North Koreans of having “no political will to improve DPRK-U.S. relations”.

The problem with negotiation goes beyond the utter frustration of such episodes. By sitting down with North Korea, the U.S. reveals it has no teeth to coerce denuclearization. The resulting loss of faith in America’s security commitments is already fueling a dangerous arms race. In violation of post-WWII agreements, Japan refitted helicopter carriers so they can launch actual fighter jets, giving China the pretext to stock up its own armed forces in response.

Protracted negotiations also tell the Ayatollah in Iran that he can hold on to his nuclear weapons indefinitely once he acquires them. Trying to talk actually encourages proliferation. Furthermore, since multilateral efforts like the “Six-Party Talks” have failed in the past to change the North’s behavior, it is questionable whether America can truly negotiate success on its own, especially when the other side considers it a mortal enemy.

Finally, there is the question on what America is willing to give up — very little as it turns out that could satisfy North Korea. Chairman Kim Jong-un’s understanding of “denuclearization” demands that America end its nuclear umbrella over South Korea. Even if North Korea somehow agreed to denuclearize, they would never give up everything. The last country that voluntarily dismantled all its nuclear warheads was post-soviet Ukraine. Kim must have learnt his lesson in 2014 when he saw on television footage of Russia’s “little green men” marching into Crimea.

Instead of negotiating, the U.S. should return to its “maximum pressure” campaign, imposing a comprehensive trade embargo until North Korea agrees to fully denuclearize. While this blunt strategy has been criticized for hurting ordinary citizens more than it does elite policy makers because the latter always find ways to get around restrictions, a shifting political climate in the regime will eventually force its leaders’ hands.

Pyongyang justifies its militarized totalitarianism by keeping alive painful memories from the Korean War. Museums displaying gruesome images of American troops pulling people apart with oxcarts remind North Koreans that forced military service and government control over all resources and information are necessary to keeping them safe. The poverty and starvation caused by these practices are swiftly blamed on “American imperialism”.

But this source of legitimacy will run dry now that nuclear weapons make the country impossible to invade. It is just a matter of time before people begin demanding better living standards knowing they will not simply die the next day.

Knowing the inevitable, Kim Jong-un must encourage economic development as an alternative source of support, explaining why he overlooked growing black market activities and replaced missile trucks with reform-themed floats during the 70th Anniversary Parade. But the embargo will deny him foreign investment crucial to creating jobs and cutting poverty unless he abandons his priceless nuclear shield. If Kim thought he could keep his warheads and fix the economy at the same time to appease his people, “maximum pressure” forces him to choose.

To truly tighten the noose around Kim’s neck, America must also enlist the help of China, a country that buys ninety-one percent of North Korean exports. With this level of economic influence, China might offer to squeeze the Hermit Kingdom in exchange for U.S. concessions on issues relevant to itself. Beijing’s list of demands will likely include freezing joint exercises with allies or ending the Navy’s “Freedom of Navigation” operations, hard to swallow given the bipartisan consensus on the need to defend Asian allies.

But one would not have to surrender anything right away if diplomats can convince the Chinese that they should be fed up with North Korea — its nuclear saber-rattling has brought nothing but THAAD and American warships upon China’s doorstep. China had better rein in its troubled ally if it wants America to truly leave the region alone. In other words, withdrawal should be framed as the result of Chinese compliance rather than its condition. Having China move first gives the U.S. more flexibility when implementing its part of the bargain. The U.S. must also send its message through third parties like South Korea. This way denuclearization reflects a desire on the part of multiple nations, making it harder for China to refuse. Once China budges, North Korea will give in very soon.

One simply cannot talk its way out of the North Korea crisis. Kim must be shown that nuclear weapons will not ensure regime survival but only quicken his inevitable demise.

Guzi He is a sophomore at The College of William & Mary in Virginia, majoring in Government. He is a columnist at The Flat Hat News and a member of William & Mary’s College Republicans. Originally from China, he moved to the U.S. for higher education. He also runs a Youtube channel where he uploads various works of music.