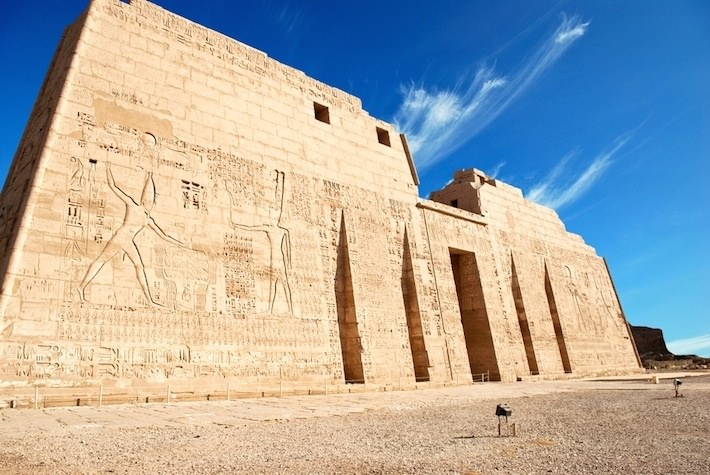 Erected in the 12th century BCE, the spectacular Mortuary Temple of Ramesses III at Medinet Habu boasts 75,350 square feet of reliefs and decorated walls. Like his namesake Ramesses II (the Great), Ramesses III enthusiastically assumed the pharaonic duty of constructing imposing temples upon which his memory was to be emblazoned. On the Mortuary Temple’s southeastern face is a particularly impressive example of a common ancient Egyptian trope: the smiting scene. The scene typically depicts the pharaoh, outsized and wielding a mace, holding a group of foreigners by their hair as he brings his weapon down upon them. It was a powerful display of imperial might and the pharaonic monopoly on state violence that remained a staple of kingly propaganda from ancient Egypt’s earliest days. In the case of Medinet Habu, Ramesses III smites Egypt’s enemies in the traditional fashion, clutching their bundled hair with one hand and a mace with the other, as the god Amun-Ra looks on approvingly, handing the king a sword with which to finish the job.

Such presentations of power were not merely spectacles or exercises in royal vanity. They were vital affirmations of the Egyptian cosmological outlook. Ancient Egyptians understood their world through the lens of a stark duality, an unending conflict between two antipodal forces. The first was maat, signifying order which the ideal Egyptian state embodied, safeguarded and imposed. Maat, being personified in a goddess of the same name, bespoke stability, justice and national solidarity. In a society that was dependent on the annual flooding of the Nile and the transverse westerly path of an infinitely reborn sun, such stable patterns, whether yearly or daily, were manifested in the maintenance of maat.

The nemesis of maat was isfet, that is disorder, chaos, violence, injustice. Its deified manifestation was Set, the god who murdered his brother Osiris only to be avenged by Horus (whom the pharaoh is said to embody in life, Osiris in death). In our world, Egyptians saw isfet in all things foreign. The Nubians, Libyans, Phoenicians, Hittites and other foes of Egypt were barbarians to be kept at bay or subdued. Since the pharaoh acted as the gods’ vanguard of order on earth, any who opposed him and his kingdom stood with Set in collusion with his evil machinations. These agents of isfet had to be stopped.

But let us return to Medinet Habu. At a glance, few would surmise that this commanding monument to a kingdom’s power was built in the twilight of the Egyptian empire, not at its apex. Indeed, Ramesses III could be said to be the last pharaoh to reign during Egypt’s imperial hegemony and the subsequent decline arguably began in the wake of one of Egypt’s greatest military victories.

On the north face of Medinet Habu one finds a dramatic record of Ramesses’ victory over the so-called Sea Peoples, a 19th century designation for an ephemeral group of marauders that does not reflect what the Egyptians themselves called them. The origins of these Sea Peoples are a matter of constant debate but many hypotheses point to remnant forces of the collapsing Mycenaean civilization in the Aegean. Regardless, they had been terrorizing Egypt and other nearby states for decades. In the eighth year of Ramesses’ reign, they struck from land and sea, invading the Nile Delta. As the scene at Medinet Habu conveys, Ramesses drove them off in a great victory that nullified the threat of the Sea Peoples and saved the kingdom. The forces of isfet had been rightly smote.

Yet the victory over the Sea Peoples represented the last high point of New Kingdom Egypt. Irreversible decline and cyclical conquests by foreign invaders defined the kingdom for the next 900 years until the advent of the Ptolemies in the late 4th century BCE.

What happened? The plague of empire, a malady that befalls all expansionary powers. The pharaonic prerogative to not only internally preserve but externally impose maat had acquired a renewed commitment by the New Kingdom’s immensely powerful monarchs governing from Thebes (and for a brief period Amarna). The empire was in a constant state of struggle with the forces of isfet and untold numbers perished by Egyptian swords. An overextended imperial domain, an inflated bureaucracy and ever-expanding military commitments to face threats largely contrived by those who initiated conflict in the first place. We’ve heard this story before. By the 10th century BCE, Egypt was in the hands of Libyan rulers. By the 8th, Nubians. By the 6th, Persians. And so on.

Ancient Egypt is a distant world from our own and popular conceptions of it are phenomenally vapid. In the West, it evokes a sense of (largely ignorant) exoticism. Indiana Jones climbing into the Well of the Souls to retrieve the Ark of the Covenant. Mummies and curses. Aliens. The reality is always more complex and rawer. Egypt was profoundly and violently human. It was strong and proud. It was frail. It appealed to the independent and the servile alike. Its example is pregnant with meaning if one only cares to look. What then can the American empire learn from the lords of the Two Lands? Does the United States have its own duality of national vision?

Like all empires of times past, and like our own in America, Egyptian imperialism was predicated on proffering a higher purpose for its conquests abroad. The acquisition of gold, silver and semiprecious stones, the seizure of fertile lands and even national security were never sufficient for the greatest of empires to justify its employment of interstate violence. Normal states wage those kinds of wars. Great empires, ordained by the gods, have a special calling. For Egypt, it was the divine imperative to safeguard maat and confront isfet.

America’s postwar imperial pretensions have largely been justified along a similar vein. Its long-pilloried role as the world’s “policeman” derives from a similar self-conception of exceptionalism. The United States, as it is, does not just wage war to reach strategic objectives or buttress its national security interests. These things are vital, no doubt, but an empire forged by an ideal greater than ourselves must continuously be fighting for one. Whatever the true reason for resorting to force of arms, America unfailingly fights for “democracy,” for “peace,” for “human rights.” The United States is not an ordinary country. It fights its wars for the extraordinary. America is the chosen country unlike any other. As Amun-Ra overawed Egypt’s exploits, God blesses America.

Global order, prosperity and democratic health were all on the docket when the United States changed regimes from Iraq to Libya but for the latest example of America’s continuing missionary strategy, one needs to look no further than the Trump administration’s dogged pursuit of maat in Venezuela. President Nicolás Maduro has always gladly embraced his role as an American punching bag, often using it to his political advantage. But now, in the wake of a suspect election, the US has mounted pressure on Maduro as never before, throwing its weight behind opposition leader and self-proclaimed President Juan Guaidó and enacting new sanctions on Petróleos de Venezuela, S.A (PdVSA), Venezuela’s state-owned oil firm. Despite the ostensible value of a stable, prosperous and friendly Venezuela to US strategy in the Western hemisphere, the rationale for Trump’s campaign against Maduro is remarkably void of serious strategic considerations.

“The United States is holding accountable those responsible for Venezuela’s tragic decline,” said Treasury Secretary Steve Mnuchin on January 28th, pledging US support for Venezuelans’ “efforts to restore their democracy.” Connecting the dots back to American strategic priorities was never a serious element of the Trump administration’s calculus. It didn’t need to be. It has never needed to be. It is an innate, unquestioned objective as given as the conquest ordinance of Egypt’s pharaohs: the US subscribes to a special, self-made creed to impose order on those places in this chaotic world that are in want of it. This “strategy” is applied with vigorous force not for any sake but its own. As it was in the land of the Nile 3,000 years ago, America’s missionary strategy is not really a strategy at all. It is a religion.

The memory of the pitiful demise of Amun-Ra’s favored empire, ruled over by the supposed scions of divine order, remains an ill omen for America’s moment in an already setting imperial sun. Belief is not strategy and no amount of pageantry, propaganda or invocation of the divine can change that. As with Ramesses III, the last of the hegemonic pharaohs, when we today choose to inflict our myopic intellection of maat upon the world we all too often reap nothing but isfet.

Scott is a recent graduate of the University of California, Berkeley where he studied political science with an emphasis on international relations. He was the founder of the Berkeley chapter of the John Quincy Adams Society and received highest departmental honors for his thesis Tehran’s Pragmatism: Iranian Strategic Culture After the Nuclear Deal. He is interested in national security policy, arms control and Iranian affairs. He also has a weird thing for Egyptology.