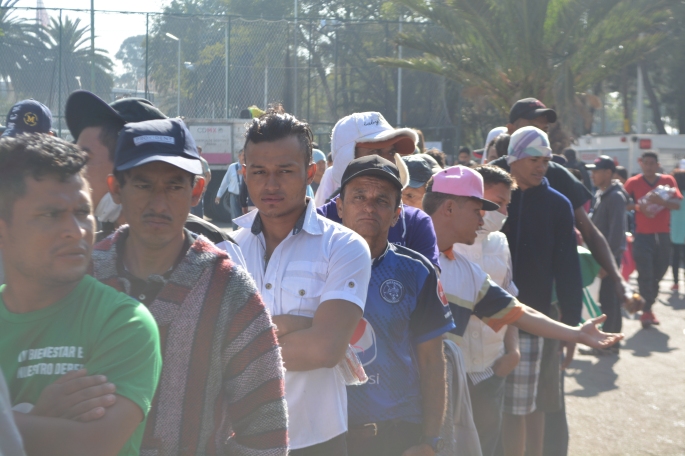 In spite of a heavy fall news cycle, the Central American refugee crisis has dominated the mainstream media for several weeks. Of course, this is in no small part due to a concerted Republican effort to place it at the forefront of the news prior to the November midterms, but the issue runs far deeper than a campaign gambit. Nearly half of Americans consider immigration a major political issue, and the renewed debate over Central American migration is a product of the issue’s resonance on both sides of the aisle. While addressing the issue with contemporary domestic policy is certainly important, it is equally if not more important to understand the catalysts for this migration and the conditions that have continued to spur it on. In order to properly do this, it is crucial to understand the tremendous impact of U.S. foreign policy on the region. From the cold war to today, the fate of central American countries has been intrinsically tied to U.S. policy decisions. The refugee crisis should serve as a quintessential example of the potential for foreign policy decisions to impact the domestic political landscape.

The overwhelming majority of migrants associated with the current mass immigration crisis come from Central America’s “Northern Triangle”, made up of the countries of El Salvador, Honduras and Guatemala. The UNHRC reports that from 2011-2016 the number of immigrants from this region has increased by a staggering 2,249% with 388,000 people fleeing in 2016 alone. Estimates for the years 2017 and 2018 are tentative but reportedly may be even larger. The majority of these refugees are women and children. Many of them have been motivated by false social media reports regarding resettlement and assistance programs.

Generally, they report that they are fleeing violence and political instability in their home countries. The persistence of these conditions in each of these nations can be most directly tied to government incompetence and political instability. The aforementioned political corruption has left many officials unwilling or unable to act to address both the direct violence perpetrated by the gangs and the root causes of this activity. Poverty alleviation and educational programs have struggled to gain traction and have in many cases been discontinued following political turmoil.

Each of the Northern Triangle nations are very much still in recovery from violent political struggle and in El Salvador and Guatemala’s cases, full blown civil war. Their political institutions, civil societies and national characters are still continuously shaped by the legacies of the violence that racked the countries in the mid-late 20th century. In efforts to combat communism and preserve the interests of capital in the Northern Triangle during the cold war the United States involved itself in a series of violent conflicts throughout the region.

The first nation to experience this brand of U.S. foreign policy was Guatemala. Following the popular overthrow of dictator Jorge Ubico in 1944, Guatemala overwhelmingly elected progressive reformers Juan José Arévalo Bermejo and Jacobo Árbenz in the nation’s first democratic elections. Neither Arévalo or Árbenz were communists, but Árbenz’s willingness to engage in land reform was enough to motivate the U.S. to back a group of exiled rebels in an invasion of the country in 1954. Árbenez was eventually overthrown, ushering in a new era of dictatorship was ushered in in Guatemala. This period that would last through the Guatemalan Civil War that raged from 1960 to 1996. This civil war again saw the U.S. back a right-wing dictatorship and resulted in the deaths of at least 100,000 people as the government perpetrated genocide against the country’s native population. a slow democratization and peace process the ended the conflict in 1996. It’s legacy however, still very much lives on. Criminal trials for those involved in extra-judicial killings continue into the present day, political parties still exist along civil war divisions and the country’s democracy and civil society are still that of a developing nation. With this background in mind it is no wonder that the nation struggles to address endemic crime and suffers from political instability.

El Salvador soon experienced its own U.S. backed civil war beginning in 1979 when leftist rebels reacted to a government coup and continued until 1992. During the brutal war, U.S. agents served as high level advisors in the Salvadorian military and in many ways directed the war effort. The war saw widespread civilian casualties with U.S. backed government forces committing an estimated 85% of the atrocities. Much like the Guatemalan Civil War, the legacy of the conflict permeates throughout society to this day.  Similarly, the major political parties are formed along conflict lines and huge portions of society have failed to recover from the devastation.

El Salvador’s endemic gang violence emerged in this fertile breeding ground of post-conflict society. As a result of the Salvadorian Civil War, huge numbers of Salvadorian refugees had fled to the United States. Some of these refugees engaged in criminal activities and were incarcerated in U.S. prisons. As a result of U.S. immigration policy in the 1990s, huge numbers of Salvadorian criminals who had been arrested in the United States were deported back to El Salvador. They were and (are still) called “maras” and brought with them the organization and violence of American street gang culture to El Salvador. These mara’s were distinctly American, dressing in styles associated with American gangster culture and tattooing themselves in ways completely foreign to Salvadorians.

Upon their return to El Salvador, the gang members found a recovering nation with many poor young men who were thoroughly desensitized to violence by the brutal civil war. This environment combined with their ability to infiltrate the U.S. and forge American connections led to the formation of an international criminal network. The most famous mara group is Mara Salvatrucha better known in the United States as MS-13. With American style criminal tactics and a name that harkened back to the peasant militias (also known as Salvatruchas) of the civil war, MS-13 has formed a unique cultural conglomeration and emerged as a violent force within each of its “parent” countries. This gang violence has been a major factor in exacerbating the refugee crisis as it has brought consistent and largely unabated violence to El Salvador.

Honduras did not experience a civil war with U.S. involvement, but did suffer under the abuses of a U.S. government and CIA trained death squads such as Battalion 316, that sought out and eliminated those seen as opponents of the regime. They utilized extrajudicial imprisonment, killings and torture to prevent any dissent among the population. Hondurans have uniquely experienced the effects of U.S. foreign policy more recently than the other Northern Triangle nations, their democratically elected president was overthrown in a coup d’état and an illegitimate election that preserved its current president’s grip on power. (Previously covered here) In each situation the United States initially condemned the illegal actions, but eventually accepted and even acknowledged the new government. The United States’ decision led to a series of other regional powers to recognize the post-coup government, and ended any hope of the continuation of genuine democracy in the nation. Today’s Honduras is increasingly undemocratic and politically unstable. Protests have occurred across the country and President Juan Orlando Hernández consistently blames the nations crime epidemic on his political opponents. Many asylum seekers have directly cited political violence as the reason they are fleeing their homes. They fear being targeted by the government for their opposition to the coup and often come bearing the stories of fellow activists who have fallen victim to government repression. Racked with political instability, authoritarianism and crime, Honduras has become an increasingly inhospitable nation for its own citizens and mass migration has continued as a result.

Throughout the early 2000s, Northern Triangle governments sought to curb violence by enacting aggressive “mano dura” or “heavy hand” policies to target gang activity. These policies led to mass incarceration and illegal violence perpetrated by government forces. While the  mano dura policies appealed to U.S. demands and even satisfied large portions of the population, they were overwhelmingly unsuccessful. The violence turned many cities into warzones and the state prison infrastructure was insufficient for housing the huge influxes of prisoners. Prisons soon were overrun and, in many cases, entirely controlled by gang affiliates. Gang activity, especially in El Salvador, and political instability in all the Northern Triangle countries is very much a product of U.S. policy. Each of the nations has seen U.S. backed political violence and suffered from U.S. immigration policy.

Each of the nations has been plagued by gang violence, with El Salvador’s homicide rate sitting at 81.2 per 100,000, Guatemala’s at 27.3 and Honduras at 59. Each of these rates is significantly above the regional and global average, but crime rates focused on direct violence alone fail to capture how thoroughly criminal elements have permeated the nation’s political and social landscape. Citizens of each country deal with extortion to the tune of hundreds of millions of dollars a year.

Corruption in government institutions is rampant with each country ranking among the upper third in Transparency International’s corruption perception index. Trust in public institutions is understandably incredibly low, with government forces often resorting to gratuitous violence in response to gang activity. Sometimes even engaging in vigilante action as seen in the Salvadorian vigilante group Sombra Negra, which is allegedly composed of current and former police and military personnel and has been accused of a string of violent torture-murders perpetrated against alleged gang members.

The Central American refugee crisis has deep roots in American foreign policy. From foreign interventions, to deportation policies the United States has been directly tied to the crisis from the beginning. The crisis’ continued relevance within the U.S. political landscape goes to show the long-lasting impact of U.S. foreign policy decisions on life at home and abroad. The solution to the current crisis remains undetermined, but a more complete understanding of the crisis and its roots would certainly contribute to preventing a future one.

Ian Elliott is a Junior at Johns Hopkins University. He studies international studies and sociology