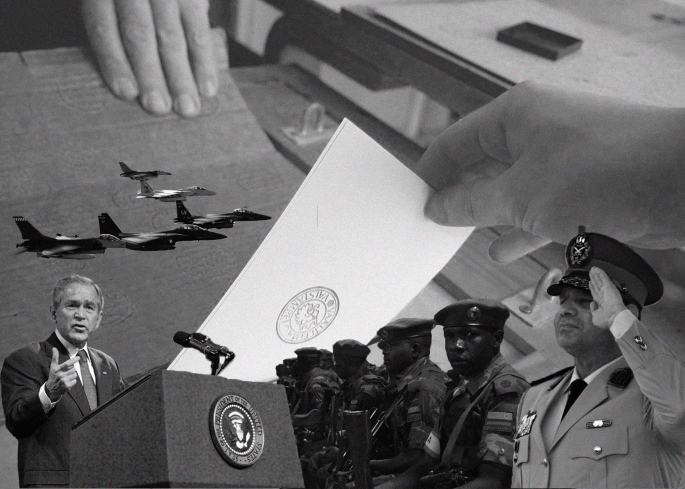 Since the arrival of the earliest settlers, America has adopted the ideal of a “city upon a hill” which is looked to as a shining example of justice, liberty, and peace. Over the past few centuries, this has been employed as a tenant of American Exceptionalism, westward expansion, and a justification for the spread of Western principles across the globe. Among this spread of classically liberal ideals is the newly emerged Democratic Peace Theory, the assertion that peace between democratic nations is more likely to be sustained than between those with differing systems of government. Although some ideas in this theory can be traced back to Immanuel Kant and Alexis de Tocqueville, the formal study of the hypothesis only came about in the 1960’s and is continuing to solidify its points. Some basic tenants of the theory include the idea that a government with popularly elected officials will have greater ability to put leaders in power that can work towards the needs of the people, which usually include non-interventionist policies. Further, a look into “democratic ideals” often shows that democracies are built on principles of cooperation, negotiation, and compromise – all things which seldom lead to military conflict.

In analyzing this theory from the standpoint of a Millennial, questions come to mind over the validity of such strong assertions and whether harmful effects can be seen from the exportation of democracy in the name of perpetual peace. In a world where democracies are now more prevalent than ever, the job of the newest generations must be to clearly define what mutually assured peace would look like. It must also determine how it can be more effective than the mutually assured destruction of previous generations, and what the future role of the United States needs to embody in order to promote liberal ideals without infringing on sovereign nations and inadvertently undermining the very principles it seeks to implement.

To properly analyze the Democratic Peace Theory, the first question that must be answered is how to clearly and consensually define a democracy. One of the most recognizable weaknesses of the theory stems from a general inability among Democratic Peace scholars to offer a unanimous definition of what constitutes a true democracy. Further complicating matters, some organizations like the International Republican Institute offer a view of democracy as a process rather than a state of being, meaning states must recognize that a liberal transition may take several decades to come to fruition. Other definitions come from scholars like Melvin Small and J. David Singer (1976), who conclude that a democracy can be defined as a nation which allows opposition parties to run freely in periodic elections as well as containing a parliament in control of the executive branch and granting voting rights to at least 10% of the adult population. Others, however, have asserted stricter limitations on what can be qualified as democratic. Michael Doyle (1983), for example, claims that a democracy must include an economy defined by free markets and private property while James Lee Ray (1995) would require suffrage for half the adult population and at least one successful transfer of power between political parties through an election. The wide disparities between scholars’ definitions of democracy have made it difficult to test the theory and left open a lot of room for debate. Further, the majority of mainstream democratic theorists have neglected tenants like universal suffrage from their definitions. Was the United States a full democracy before the introduction of the 15th and 19th amendments? These questions and many others must be addressed before it can be possible to ascertain whether or not democratization truly makes a nation less inclined to violent conflict with similarly-governed states.

A second key tenant of the democratic peace theory stems from the idea that a voting public will always vote against war, meaning that two democracies would never elect to declare war against each other. The logic behind this is lacking, however, as it does not take into account that many countries like the United States have measures in place to allow Congress to declare war even without the direct consent of the governed. Further, we have seen in numerous cases that non-interventionist policies have not always been the desire of a democratic public. The United States, for example, shifted its view to support involvement in the Second World War with the news of a Japanese strike on Pearl Harbor. With the right conditions, one could argue that any public can be persuaded into supporting intervention in a military conflict.

In just the past few decades, generations of Americans have been exposed to wildly different outlooks concerning the institution of democracy. After the hyper-nationalism following the Allied victory of World War II and the paranoid defense of a democratic capitalist lifestyle in the wake of the Cold War, the Millennials of today have seen things a little differently. As witnesses to the aftermath of the war in Vietnam and the failure of invasions in Iraq and Afghanistan, the younger generations have seen democratization employed as a justification for increasingly interventionist policies that often lead to high losses and further instability after regime change. The idea of a Democratic Peace has acted as the backbone for U.S. involvement in illiberal systems in order to export democracy and ideally spread our way of life abroad. Millennials, however, are starting to move away from this outlook as we begin to embrace a more realist identity under an administration that has little interest in global involvement. This shift comes after a barrage of embarrassments in American foreign policy including interference in the 1996 Russian election, ensuring a victory for Boris Yeltsin and the subsequent instability of democracy in Russia in the decades to come. Further, it has been shown that younger democracies and regimes undergoing intense changes are often much more at risk for outbreaks of civil unrest and violence, like in the case of the Central African Republic and South Sudan – the world’s youngest country and democracy.

A final question which must be addressed is the role of economic incentives in promoting peace between nations. Are two states truly less inclined to violence if they share political values or does the greater deterrent stem from a mutual economic incentive like free trade agreements? It can be argued that a Free Market Peace Theory may be a more fitting title for such a study, as partnerships between nations like the U.S. and China act as examples of peace held together by greater levels of trade and foreign investment. While democratic values seem to go hand in hand with free market principles, the two are not necessarily bound together. Thus, it is entirely possible that two nations could sustain peaceful economic engagements without subscribing to the same government system or liberal principles.

Despite the American foreign policy trends of the last few decades, it is clear that the common belief in peace through a pressure to democratize is not the most effective course of action. With U.S. interference in everything from foreign elections to military coups, the newer generations have been exposed to the downsides of exporting American principles in the name of mutually assured peace. For these noted reasons, the Democratic Peace Theory can be deconstructed as an untestable hypothesis employed to perpetuate an unhealthy level of involvement in the political affairs of our neighbors around the world.

Caroline is a current Program Coordinator with Atlantis Global and recent graduate of Baylor University where she pursued interests in U.S.-Russia relations, French and Russian language, and Model United Nations.