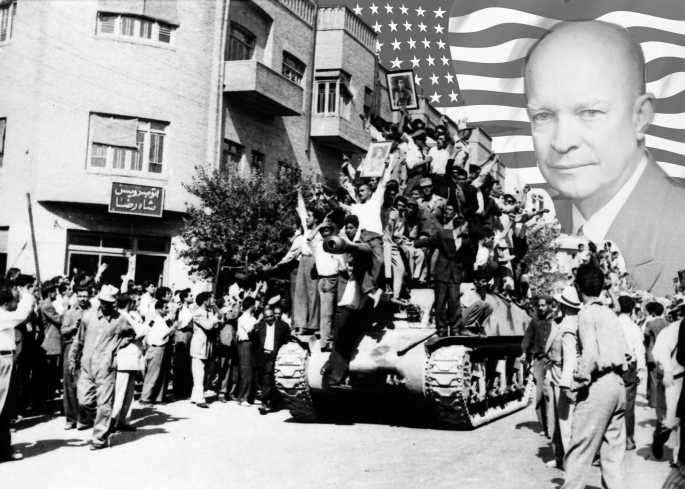 With much fanfare, Secretary of State Mike Pompeo announced the creation of an “Iran Action Group” on August 16, 2019. Pompeo claimed that the group’s goal is to “change the Iranian regime’s behavior,” citing a litany of “destabilizing behavior” but stopping short of specific demands.

Commentators were quick to spot that the announcement came only days before the anniversary of the 19 August 1953 coup d’etat in Iran. Newly-appointed Special Representative Brian Hook called the timing “pure coincidence,” but the damage was already done. Foreign Minister Javad Zarif of Iran quickly pointed out the historical significance, writing on Twitter that “65 years ago today, the US overthrew the popularly elected democratic government…Now an ‘Action Group’ dreams of doing the same through pressure, misinformation & demagoguery.“

Indeed, as the US government itself has admitted, the CIA played a huge role in the royalist putsch against Prime Minister Mohammad Mossadegh. Elected in 1951, National Front leader Mossadegh clashed with Shahanshah (Emperor) Mohammad Reza Pahlavi by attempting to nationalize the Anglo-Iranian Oil Company, a British quasi-state entity that had a monopoly on southern Iranian energy resources. After the Shahanshah fled to Rome, the newly-elected Eisenhower administration helped a clique of right-wing officers overthrow Mossadegh. The Shahanshah returned, and slowly transformed Iran’s constitutional monarchy into a one-party state until his overthrow in 1979.

For obvious reasons, these events have cast a shadow over US-Iran relations for decades. On one side of the Atlantic, Iranian officials such as Zarif frequently use the coup as evidence of America’s malign behavior in the Middle East.

On the other side, Americans who lean dovish point to 1953 as an understandable cause of anti-American sentiment. New York Times correspondent Stephen Kinzer even argues in the epilogue to All the Shah’s Men that a “direct line” extends from the coup “through the Shah’s repressive regime and the Islamic Revolution to the fireballs that engulfed the World Trade Center in New York.”

Of course, a single CIA operation can’t explain everything that has happened in the Muslim world since 1953. John Allen Gay (executive director of the John Quincy Adams Society which publishes Realist Review) pushes back against narratives like All the Shah’s Men in a 2015 article, making the obvious point that “there is no straight line from Mossadegh’s fall to the rise of the Islamic Republic” because several decades of intense political and social changes happened between 1953 and 1979.

But with all due respect, Gay’s claim that “[t]he coup of August 1953 tells us very little about Iran today or about how America should approach it” pushes too far in the other direction. The coup set up a pattern of US-Iran relations that today’s tensions still fall into. It didn’t directly create the Islamic Republic of Iran—but this relationship dynamic would look very similar for a People’s Republic of Iran or even a Democratic Republic of Iran.

American historians often claim that Mossadegh’s fall discredited liberalism in Iran. Kinzer points out that Iran’s current spiritual leader Ayatollah Ali Khamenei once said, “We are not liberals like Allende and Mossadegh, whom the CIA can snuff out.”

But the Islamists following Ayatollah Ruhollah Khomeini were only one of many radical factions active in the 1970s. Communists played a major role in the anti-royalist underground. Even after Khomeini’s followers were clearly in control of the revolution, Polish journalist Ryszard Kapuściński wrote in Szachinszach that “the opposition combat groups (religious fanatics, anarchists, last remnants of [the royalist intelligence service] Savak)” were still an active threat in the heart of Tehran. The Islamic Republic wasn’t fated to take over Iran, and won because of choices made by Iranians.

Ironically, regime change hawk John Bolton is one of the strongest proponents of the Mojahedin-e Khalq, a now-exiled opposition combat group that had “supported and participated in” the 1979 raid on the US Embassy in Tehran.

However, realists know that the internal politics of a country do not change the underlying causes of its foreign policy. The coup against Mossadegh was a demonstration of US soft power that permanently altered the strategic calculus of Iran’s leaders. It showed that the US can bring down other governments quietly from a distance—and that US Presidents are willing to use that power on behalf of US allies, even when vital interests are not at stake.

That last point must be especially disturbing to Iran’s leadership, who watch as Israel’s firebrand leader Benjamin Netanyahu pushes for even harsher US policies towards the Islamic Republic and Saudi state-affiliated media openly fantasize about conquering Iran with American weapons.

Any successful revolution is immediately confronted with the challenge of defending its existence against the former regime’s allies—and the Pahlavi dynasty had powerful allies in 1979. In addition to America’s large naval presence in the Persian Gulf and leverage over world markets—both of which the British had used to menace Mossadegh’s government—anti-Pahlavi revolutionaries had to be wary of a counterrevolution at home. This would be as true for Communists or liberals as it was for the Islamists.

From the perspective of the 1979 revolutionaries, the 1953 coup provided a deeply unsettling model that tied external and internal threats together.

On the eve of the 1953 coup, Kinzer writes, the CIA’s network in Iran “had been assembled at great cost and had shown its ability to spread inflammatory rumors, place provocative articles in newspapers, manipulate politicians, influence mullahs, and produced hired crowds on short notice.” In other words, it was impossible to tell the difference between organic political chaos and a vast conspiracy directed by Washington.

Even without access to classified information, the role Mossadegh’s trusting nature had played in his downfall was already obvious. Kinzer notes that Mossadegh’s hesitation to crack down on other factions allowed chaos to spread, and accuses then-Ambassador Loy Henderson of running interference for the CIA during his meetings with Mossadegh.

Even more blatantly, the US had fostered goodwill with the National Front under the Truman administration, only for Truman’s successors to support Mossadegh’s jailers after 1953.

The example set by 1953 incentivized paranoia and brutality by Iran’s future governments. Even the most liberal regime would have to ensure its own survival before allowing for pluralism. This guaranteed Iranian hostility towards US soft power—or anything that looked like it.

When the Iranian revolutionaries who took American diplomatic personnel hostage in 1979 called the US Embassy a “den of spies,” they weren’t just chanting a slogan—they were articulating a real belief. Although the hostage-takers were backed by Khomeini, not all of them were orthodox pro-Khomeini Islamists; some of them ended up in jail for their post-1979 political activities.

Of course, the US was rightfully angry with Iran that state-sponsored groups had attacked an embassy and taken American citizens hostage. But intentionally or unintentionally, later US actions confirmed the very belief in an American conspiracy that led to the hostage crisis.

In another country facing US sanctions and mass unrest, Venezuela, the US has secretly been in contact with military officers plotting to overthrow the president. Tasnim, a mouthpiece of Iran’s Revolutionary Guards,’was quick to translate the New York Times investigation revealing this contact.

Whether or not the US is actually connected to the recent nationwide unrest in Iran, these parallels have made officials such as Parliament Speaker Ali Larijani anxiously talking about the events of August 1953.

Unfortunately for Iranians, any segment of civil society with an international outlook can become collateral damage of the government’s fear, with authorities treating them as an instrument of foreign soft power.

The memory of 1953 also makes diplomacy much harder. When Iran’s government reads every domestic setback as a potential conspiracy by the US, then actual signals from the US get buried in the noise.

In a separate but related example of misread signals, the US Navy shot down Iran Air Flight 655 in 1988. Iranian leaders viewed the incident as an intentional belligerent message from the US government, even though the US Navy claimed that its attack on the civilian airliner was a mistake.

More dangerously, if the Iranian government believes that domestic opposition is controlled by Washington, it may respond to domestic unrest by lashing out at American interests outside Iran’s borders. With US and Iranian forces operating so closely to each other—and to third parties like Russia and Turkey—it’s a recipe for unpredictable and uncontrollable violence. A spontaneous demonstration in Bandar Abbas may cause a military escalation on the other side of the Persian Gulf.

Instability in Iran could also provoke a response from Russia and China. According to the New Yorker, Russian leader Vladimir Putin saw the Libyan Civil War as “a case study in Western intervention: stir up protests, give them rhetorical support and diplomatic cover, and, if that doesn’t work, send in the fighter jets.” Reportedly, this led Putin to crack down on dissent at home and retaliate by interfering in US elections.

Fortunately for Americans, bringing this vicious cycle under control does not require paying reparations to Iran. However, it does require a serious change in the Trump administration’s behavior.

The administration is currently sending extreme mixed signals to Iran. Officially, the goal of sanctions is not regime change—but the President is hinting at the opposite, while his advisors flirt with militant groups in the Iranian diaspora. To make matters worse, US officials can’t agree on what interests they actually want to defend by force—or stick to their decisions.

Iran’s leaders can’t help but assume the worst. History has taught them that anything else could be their demise.

Matthew Petti is a rising senior and Foreign Language Area Studies (Arabic) fellow at Columbia University, and a former documentary production intern at CNBC. Matthew’s work on minority rights and migration has been published in Reason Magazine, the National Interest, and America Magazine. Follow him on Twitter at @matthewpetti!