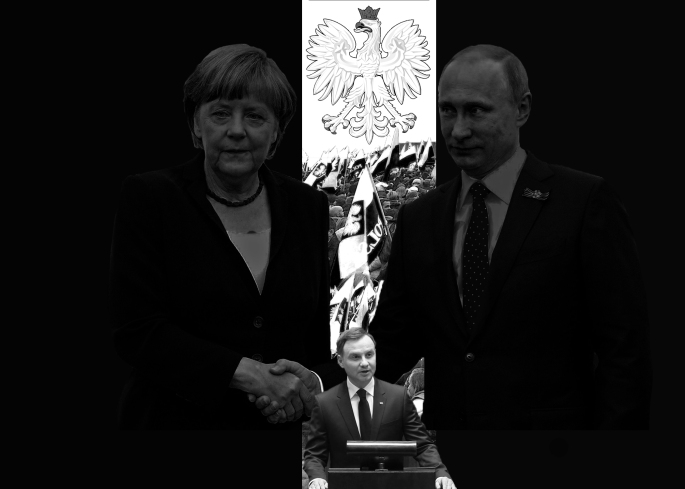 Poland is once again stranded between two competing forces, the European Union to the West and an invigorated Russia to the East, defying either’s encroachment on its hard-won independence. As dark clouds gather over Warsaw, an unexpected ally, the President of the United States, is reaching out with promises of the U.S. force of arms to deter Russia and economic and political assistance to decrease Poland’s reliance on both neighbors. The next moves of the Polish populist government, whose avowed end is the regional superiority and unfettered sovereignty of Poland, will doubtless have historic significance for the country and for Europe. But as Poland weighs its choices, it must not forget its history, and specifically the perils of standing alone between Berlin and Moscow and counting on a faraway ally to come to the rescue.

For Poland’s status as a member of the European community, matters took an abrupt turn with the Polish presidential and parliament elections in late 2015. The incumbent government, led by the centrist Civic Platform (PO), was the poster child for the European integration project. But before the clock struck election time, the party leader, Donald Tusk, went off to lead the European Council, a body composed of heads of state of European countries who meet to set the goals and the general vision for the continent. Thus, all but leaderless and all-too confident, the Civic Platform suffered a series of crushing defeats, first with the election of the Law and Justice (PiS) presidential candidate, Andrzej Duda, and then a massive overtake of the Sejm, the lower house of the Parliament, by PiS.

Running on a right wing, populist platform, PiS tapped into the anger at EU institutions and laws that many Polish people considered foreign, undemocratic, and oppressive. This sentiment caught the dozy liberal establishment completely off-guard, allowing PiS to sweep the elections and push through major reforms of the judiciary, the media and social welfare. PiS defends these controversial steps as necessary to fight corruption and rent seeking institutionalized by the previous government, and it has successfully convinced a large portion of the Polish nation of that its crusade is valid. Public opinion polls show that Poles from across the socioeconomic spectrum continue to support the “Family 500+” redistribution program, a flagship project of PiS, and the party retains a 10 percentage points lead going into the next parliamentary elections in 2019 over its biggest rival, the Civic Platform.

Even though the fragmented opposition could do little to mount any serious effort to halt, let alone overturn the changes, the civil society has been more successful in organizing country-wide protests and calling on the European Union for intervention in what they see as an attack on Polish democracy. A year after the elections, the European Commission first mentioned the possibility of triggering Article 7  of the Lisbon Treaty against Poland, a powerful but cumbersome infringement procedure. With the qualified majority in the EU Parliament and a unanimous vote of the member states, the Commission could even suspend the voting rights of a member state and impose sanctions for violating the rule of law.

As the stand-off between the Polish government and the EU Commission intensified, heavy blows came down on the European Union. Over a million immigrants and refugees from the Middle East have flooded Europe, Brexit has cast a shadow over the European project, and, most unexpectedly, the erstwhile sponsor and champion of the EU, the United States, has switched sides and joined the Polish cause. One need only look at the last year’s visit of the U.S. President to Warsaw to understand the natural affinity and apparent trust between American and Polish leadership. Under the monument to the 1944 Warsaw Uprising, President Trump pitched the Polish-American alliance in terms of a great cultural conflict between the West and, broadly speaking, all those who wish to “destroy our way of life,” be it Muslim terrorists or Brussels bureaucrats. He praised Poland––as much the people as the ruling party––for supporting his candidacy for presidency and for spending the benchmark 2% of GDP on defense.

Donald Trump had more to offer Poland then words of praise. Despite famously calling the Atlantic Treaty “obsolete,” he didn’t hesitate to execute the 2016 NATO Summit resolve to move 4,000 troops into Poland and the Baltic States on a rotational basis. Mr. Trump also played a major role at this year’s July NATO Summit in getting the organization to significantly bolster its forward presence, cyber capabilities, and pledge to increase defense spending by 2020 in a show of unity. This newfound sense of urgency may have been sparked by NATO’s growing tension with Russia or by President Trump’s own scorching criticism––most likely a combination of the two. Poland, along with other former members of the Soviet Bloc, stands the most to gain from this development. A robust NATO provides Warsaw with greater security from an increasingly assertive Russia, including cybersecurity.

Recently, the Polish Foreign Ministry took to courting Mr. Trump back and promised up to $2 billion dollars for a brand-new U.S. military base northwest of Warsaw, and an armored division 15,000 soldiers-strong to boot. In a single stroke, this would silence the claims of many critics of PiS that Warsaw is isolating itself on the world stage. However, in addition to logistical obstacles, such bilateral deal would bypass official NATO channels, sowing distrust on the Eastern flank of the alliance, says the retired commanding general of the U.S. Army in Europe. It would also provoke the ire of the Kremlin and turn up the heat between Poland and her ancient enemy to a new, dangerous high.

While defending its political reforms in front of the E.U. Commission in Brussels, Poland also felt the heat from Russia on its eastern flank. In the three years since PiS came to power, Moscow has increased its pressure on the Baltic States, conducted threatening military exercises on its Western border, and has continued to destabilize Ukraine. Russian short and middle-range ballistic missiles loom over Poland’s head in the Kaliningrad Oblast, a Russian enclave on its north-east border. Once again, Poland is reliving its biggest fears with the Nord Stream 2 project underway. This is the second version of the pipeline which runs hundreds of kilometers across the Baltic Sea, pumping Russian natural gas straight into Germany, circumventing Poland. Where some disinterested countries may see a purely economic venture, Poland is having a déjà vu of the Ribbentrop-Molotov Pact from 1939 between Nazi Germany and the Soviet Union. The actors changed but the game remained the same. With Poland’s crude oil and natural gas being largely dependent on Russia’s exports, it fears Russia may cut off its gas supply in a geopolitical blackmail, which it has repeatedly done before. Poland also views any closer economic cooperation between Moscow and Berlin in the energy sector as potentially lethal, especially one where it is entirely left out of the conversation. Polish analysts will be looking closely at the summit on August 17th between the German Chancellor Angela Merkel and the Russian president Vladimir Putin near Berlin, with Nord Stream 2 high up on the agenda.

However, the potent pipeline also carries with itself the promise of growing closer with the United States. Donald Trump has been vocal in expressing his discontent at Germany for signing on to the project, and one U.S. senator already proposed legislation to sanction firms doing business with Nord Stream 2. Like his promise of military assistance to Poland, Mr. Trump might actually back his words with action––with shipments of U.S. liquified natural gas (LNG), he could help take Poland off the Russian imports and fill up the U.S. Treasury coffers in a kind of “deal” very much in taste of the President’s foreign policy. Even if Poland continues to buy Russian gas, it might get a better deal from Gazprom–– Russian energy behemoth and the parent company of Nord Stream 2––simply out of fear of losing Poland’s demand to the U.S. If energy diversification is the goal, Poland could for once cash in the dividend of its central geographic location by playing off American economic interests against those of Russia.

In the past, Poland’s tragic position in a deadly embrace between the East and West was a function of geography, and geography was the force that precipitated and eventually sealed its downfall. Today, the country may have a say in its own survival, if PiS plays their hand wisely. With the European Union going through a political and what some might call an identity crisis, Poland stands both the precipitator and the big loser of any potential unraveling. If, however, PiS decides on a more conciliatory tone with Brussels––relaxing its dangerously tight grip on its institutions, chief among these the judiciary and the media––it may turn Poland into an important regional player both within the EU and in its own right. There remain big unknowns, like the limits of the American resolve to pour more resources and troops into Eastern Europe or its capacity to decrease Poland’s dependence on Russian energy. Still, one thing remains clear––the age-old truth that Poland, no matter its internal politics, must not stand against both Berlin and Moscow, or it may not stand at all.

Jan Gerber is a sophomore at The King’s College in New York City, majoring in Politics, Philosophy and Economics (PP&E). He is the founder and the president of the John Quincy Adams Society Chapter at King’s. Originally from Poland, he moved to the U.S. in search of higher education and the experience of living abroad. He is also a languages enthusiast and an American history wonk.