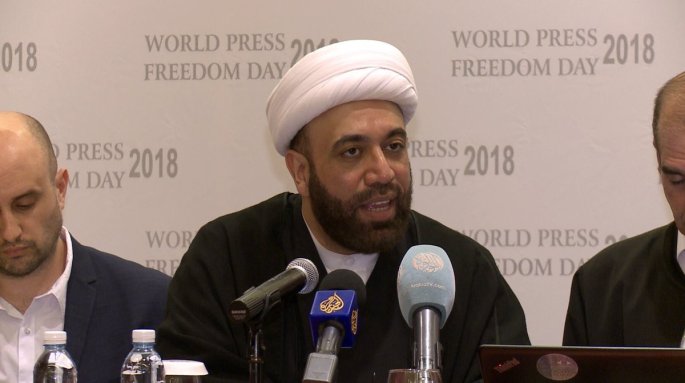 BEIRUT―”I’m not part of the opposition, and I never was,” says Bahraini activist Maytham Al Salman. “I would characterize myself as a Bahraini being, looking for peace and stability.”

But his own government disagrees. When we meet at the Beirut offices of Bahrain Interfaith, where Mr. Al Salman serves as Chairperson, he holds up his partially-missing thumb. Mr. Al Salman says that this is the result of torture in prison. After his jailers smashed his hand with a hammer, doctors had to amputate part of the thumb. He shows me a gruesome photo from the operation on his phone.

“My love of country has allowed me to mature past the pain of torture and call for peace,” Mr. Al Salman says. But he worries that the regime is paving the way for violence.

The island kingdom of Bahrain, home to 1.6 million people—and America’s Fifth Fleet—is still smouldering from the Arab Spring. After the abortive Pearl Revolution in 2011, the Bahraini monarchy—bolstered by Saudi and Emirati troops—has aggressively repressed opposition groups. Emboldened by the Trump administration, the government has escalated its crackdown in recent months.

Bahraini authorities claim to be fighting extremists backed by Iran. Mr. Al Salman, who works with Columbia University’s Global Freedom of Expression initiative, says that he and other activists are being subjected to brutality and torture just for promoting human rights. And he believes that the United States can play a role in curbing the violence, Mr. Al Salman was jailed for inciting hatred, a charge he calls “the label they use to silence anyone who has a loud voice.”

The charges are ironic, since Mr. Al Salman served on the UN Committee for the Prevention of Genocide and founded an organization called the Middle East and North Africa Civil Society Coalition to Counter Incitement to Hatred. A report published by Columbia University and signed by several prominent legal scholars says that the “repeated detention, interrogation and unsubstantiated charges” against Mr. Al Salman are “aimed at instilling fears and self-censorship, and amounting to harassment.”

But foreign pressure—whether from governments or NGOs—is much less likely to succeed at curbing the Bahraini authorities’ actions after President Donald Trump’s meeting with Bahraini King Hamad Al Khalifa in May 2017. Although the Obama administration had halted a $5 billion weapons deal with Bahrain—a move Mr. Al Salman praises as effective pressure to respect human rights—Trump resumed the deal and reassured Al Khalifa that “there won’t be strain with this administration.”

However, the problem is not limited to Trump. Mr. Al Salman complains that the US has not one but four foreign policy positions, coming from the State Department, the Pentagon, Capitol Hill, and the Presidency. “The day those four positions are aligned, dialogue will begin” between Bahrain’s government and opposition, Mr. Al Salman says, adding that the State Department is a strong backer of religious freedom.

The Bahraini government’s strategy rests on two planks, according to Mr. Al Salman: framing democratic demands as “part of a Shia agenda,” and using “excessive force,” including “torturing detainees to death.” Even the Bahraini government has acknowledged that some political prisoners have died under torture.

Earlier this year, Bahraini authorities banned members of both the Shi’a-oriented Wefaq and the secular National Democratic Action Party from running in elections. The regime has levied charges of promoting terrorism against these two groups.

Mr. Al Salman repeatedly mentions Nabeel Rajab, a Bahraini activist sentenced to five years in prison for blogging about the Saudi-led war in Yemen; and Ibrahim Sharif, the head of the National Democratic Action Party arrested three years ago for “inciting hatred” against the government. American officials pushed to protect Mr. Rajab during the Obama administration, a move Mr. Al Salman praises as constructive. In a 2017 statement, the State Department continued to express “concern” over Mr. Rajab’s fate.

Nidal Al Salman, a member of the Bahrain Center for Human Rights and Mr. Al Salman’s sister, says that many doctors and teachers have been rounded up as part of the crackdowns.

This common repression has pushed religious and secular factions together, and put civil society and the clergy in the same boat. Mr. Al Salman, who is himself a Shi’a cleric, adds that religious leaders “should

be on the front lines of defending human rights and countering violent extremism.” He sees the role of NGOs to “diffuse” the conflict between the government and opposition. “Violence cannot be a means to repress civil rights,” he says, “and it cannot be a means to gain them.”

He cites the May 23, 2017 raid on Duraz, during which security forces opened fire on a sit-in, killing five. Bahrain claims to have seized Iranian-made weapons from the protesters. The raid took place less than 48 hours after Trump’s meeting with the king of Bahrain. Mr. Al Salman explains that the demonstrators were gathered to protest the revocation of Shi’a cleric Isa Qassim’s citizenship the day before.

Bahraini authorities have taken citizenship away from more than 300 people for political reasons, according to a Human Rights Watch report from October 31, 2016. Mr. Al Salman himself was subject to a travel ban until last year.

“[Qassim] is the highest religious authority, like the Pope, for 65% of Bahrain,” Mr. Al Salman says. “The attack on Ayatollah Qassim is seen by millions as an attack on the Shi’a presence in Bahrain.”

Shi’a Muslims are the majority of the population in Bahrain, although there are no exact statistics. In the 2017 International Religious Freedom Report on Bahrain, the State Department reported that “Shia prisoners were vulnerable to intimidation, harassment, and ill treatment by prison guards because of their religious affiliation. Shia community representatives said there was ongoing discrimination in government employment, education, and the justice system.”

Ayatollah Qassim is an important leader in al-Wefaq, and authorities have accused him of “serving foreign interests.” His health has worsened under house arrest, although he was recently allowed to travel abroad for surgery.

Mr. Al Salman notes that Ayatollah Qassim is a political moderate who has attempted dialogue with the government, and participated in the country’s 1972 constitutional assembly. “Instead of utilizing a relationship” with the Ayatollah, Mr. Al Salman complains, the authorities “have entered into a spiral of geopolitical tension.”

“When you corner moderates… and insult religious leaders who forbid violence like Ayatollah Qassim, you obviously pave the way for the growth of extremism,” he says.

Mr. Al Salman quotes a May 2011 speech by Barack Obama, in which the then-President said, “Coptic Christians must have the right to worship freely in Cairo, just as Shia must never have their mosques destroyed in Bahrain.”

“I would like to see the US administration re-initiate their previous calls for an all-inclusive dialogue process,” Mr. Al Salman says, “that leads to achieving the demands of all Bahrainis, regardless of their background or religion.”

However, the Shi’a character of the opposition has led the ruling family—which is Sunni—to characterize it as an Iranian plot to reconquer the island. Bahraini police often claim to have disrupted violent plots against the government, usually pointing the finger at Iran. As the Trump administration attempts to ramp up pressure against Tehran, it has eagerly emphasized the importance of “countering Iran’s malign activities.”

When I ask Mr. Al Salman about Iranian involvement in Bahrain, however, he becomes upset. “Accusing 60% of the country of being part of an Iranian insurgency is not only inaccurate, it’s a sheer lie to whitewash human rights violations.” Mr. Al Salman compares the 2011 Bahraini uprising to other Arab Spring revolutions. He says that opposition was willing to keep the ruling House of Khalifa in power if there were clear democratic mechanisms, like an elected Prime Minister and a parliament with legislative power.

Not all of the opposition is even Shi’a. Mr. Sharif of the National Democratic Action Party comes from a Sunni background.

“We definitely don’t want to be part of a proxy war between our two huge neighbors,” Mr. Al Salman adds.

He says that it’s incredibly insulting to hear about a “Safavid conspiracy,” a term referring to the last Persian imperial dynasty and often used by Bahraini media. “With all due respect, Bahrain was Shi’a for hundreds of years before Iran converted from Sunni to Shi’a” during the Safavid dynasty.

Bahraini media has thrown around the terms “magus” (pagan) and “rāfiḍī” (heretic) as well. Mr. Al Salman says these slurs are more or less endorsed by the regime, claiming that there is no news independent of state censorship in Bahrain.

Reporters Without Borders gave Bahrain a World Press Freedom Index ranking of 166 out of 180 in 2018, saying that there was “an increase in the persecution and censorship of dissidents in 2011, especially after the uprisings by the Shia opposition in the east of the country.”

Although Mr. Al Salman disavows any Iranian role in Bahrain, there are signs that growing frustration in Bahrain is increasing Tehran’s influence. The Washington Post claimed in May that Bahraini militants are increasingly attacking police with Iranian-made weapons.

Mr. Al Salman doesn’t directly acknowledge this violence, but does allude to the conditions fueling it. Repression “is obviously opening the way for the loss of hope, and the growth of frustration, and that only leads to a sad ending.” With the US Fifth Fleet based in Bahrain, and recent Iranian threats to shut down oil exports from the Persian Gulf, such a “sad ending” could have implications far beyond Bahrain’s borders.

In recent months the Saudi-Iranian cold war has been partially eclipsed in the Persian Gulf by the Saudi-Qatari rift. In November, Bahraini authorities accused Ali Salman, General Secretary of al-Wefaq, of spying for Qatar. The charges were based on contacts between him and the Qatari foreign ministry in 2011.

Mr. Al Salman says that Mr. Salman was persecuted “for having a positive response to the US attempt to create the grounds for a peaceful reconciliation,” claiming that the contacts between Mr. Salman and the Qataris were part of an attempt by American official Jeffrey Feltman to mediate between the Bahraini regime and opposition.

According to a December 2, 2009 diplomatic cable published by WikiLeaks, the US Embassy in Bahrain was in contact with “the leader of the mainstream Shia Wifaq [sic] party.” Realist Review was unable to verify whether this contact was ongoing in 2011.

Mr. Salman was acquitted in late June. Bahrain’s government plans to appeal the case. State Department spokeswoman Heather Nauert, on the other hand, urged the Bahraini authorities not to push forwards with the case, claiming that the “acquittal removes a potential barrier to political reconciliation in Bahrain.”

Mr. Al Salman welcomes this kind of pressure. “This is the role expected from the US,” he says, “and appreciated by us.” “I believe the US can lead a success story in resolving the conflict,” he says, “it’s in the US’s national interests to ensure sustainability in Bahrain.”